Skip to content
You are here: Home > Paddle Board Tips & Advice 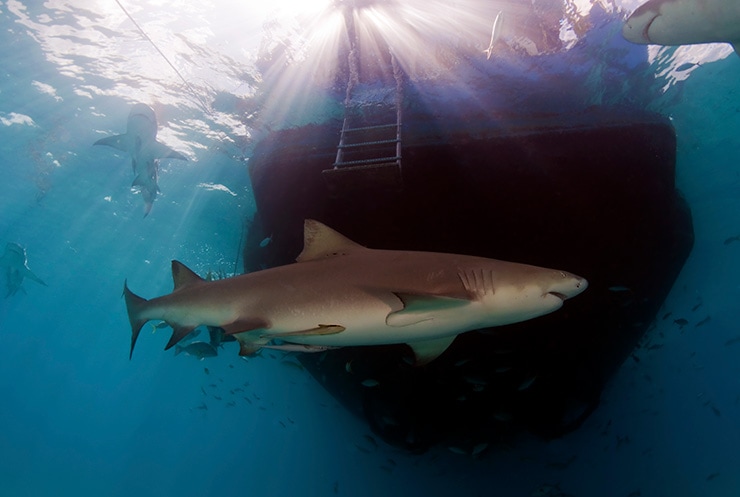 Although humans aren’t the food of choice for sharks, they still fall victim to shark attacks every year. Unprovoked attacks do occur when sharks go after swimmers, or people on surf boards, and even small boats, but the reality is that any type of shark bite is somewhat unlikely in the grand scheme of things.

In fact, just 137 shark attacks occurred worldwide in 2021, 73 of which were classed as unprovoked attacks, where the human ‘did not initiate any interaction’ with the shark.

While there are indeed instances of sharks attacking paddle boarders, it’s important to note that sharks are not going after humans, but will sometimes mistake your paddle board, or your motions as prey.

Much like surfers, paddle boarders can often resemble food to sharks who are on the hunt.  Sometimes, your paddle board simply piques their interest, beckoning sharks to come closer.

Unfortunately, this means that sharks can, and have, attacked paddle boarders while out on the ocean. The fact that less than 150 attacks occurred last year alone proves that shark attacks are still pretty rare. To put it another way, you have roughly a 1 in 3,748,067 chance of getting attacked by a shark when out in the ocean.

While these statistics should put you at ease, it’s still important to know what to expect when you’re on the water. A little knowledge can significantly reduce your chances of getting attacked by a shark in the first place.

Let’s go over everything you need to know when it comes to why sharks attack paddle boarders and how you can stay safe in the ocean.

Why Do Sharks Attack Paddle Boarders?

So why exactly do sharks attack paddle boarders? Unless it’s a provoked attack (where a person deliberately engages the shark), there is usually a reason why a shark might be singling you out in an unprovoked attack.

Here are the most common reasons why sharks will come toward you if you’re in the ocean on your paddle board.

They Think the Paddle Board Is Food

Sharks may come after your paddle board because they think it is food. The elongated shape of a paddle board can resemble seals or larger fish, and if your feet are dangling overboard, your motions can act as a sort of bait.

They’re Scared of the Board

It’s important to remember that when you’re on a paddle board, or in the water in general, you’re in a shark’s habitat. For some sharks, seeing a paddle board is intimidating and their instinct is to defend themselves.

Curiosity may have killed the cat, but in this case, it prompted a shark to get closer to your paddle board. Sharks might lurk near your board or even engage with it simply because they’re curious.

Paddle boards, especially those with contrasting colors or shiny elements might catch the attention of a shark. If a shark is coming near your paddle board because it’s curious, it won’t show outward aggression, but it might startle you.

If you find yourself as the subject of a shark’s curiosity, stay calm. Keep your movement still, and don’t give them a reason to come closer. Often, a shark will decide it’s not interested and will swim away.

How Often Do Shark Attacks Occur?

Although scary, and even fatal in worst-case scenarios, it’s worth reiterating that shark attacks are still rare. Believe it or not, you have a better chance of dying while taking a selfie than dying from being attacked by a shark.

According to data combined by PetPedia, the United States remains to be the nation with the highest number of shark attacks. Despite this, between 1837 and 2017, there have been roughly 1,400 shark attacks, with only a handful of them being fatal.

Finally, it might surprise you to know that, although sharks can be aggressive and predatory creatures, they are more at risk of dying than you are. There are over 100 million shark deaths every year with a majority of these sharks dying because of human behavior.

Most sharks die because of humanity’s demand for shark fin soup, a delicacy in some cultures.

If a shark attack does happen, it’s not always intentional. Shark attacks are classified as either provoked or unprovoked.

Provoked attacks occur when someone in the water is doing something to agitate or instigate a shark’s aggressive behavior, usually intentionally. Provoked shark attacks can result from an individual hitting a shark with a board or paddle, swimming into their territory, or doing any other action that might irritate them.

Unprovoked shark attacks occur when a shark decides to be aggressive for no particular reason. Often this is when a shark’s curiosity turns into an attack.

What to Do if You Spot a Shark While Paddle Boarding

If you spot a shark in the water while you’re out paddle boarding, it’s important to stop, remain calm, and assess the situation.

The ultimate goal should always be to get out of the water safely, but reacting severely, paddling erratically, and making a whole lot of noise is not the way to go about it.

The type of shark encounter you have also determines how you should respond. For example, if you notice a shark swimming near you and coming closer, it might be because the shark is curious and is trying to get a closer look. In cases like this, you should always remain calm, but try to do your best to quietly and calmly paddle back to shore.

Never provoke a shark by hitting it with your paddle, making loud noises to scare the shark away, or splashing the water to try to intimidate the shark.

In the very rare event you find yourself the victim of an aggressive shark attack, it’s important to remain calm, yet respond quickly.  Keep in mind that sharks are not attracted to humans as prey, but are instead attracted to the shape of your paddle board because it resembles their prey.

If you get attacked by a shark try to keep your extremities out of the water and on the board all while trying to stay on your SUP. If a shark takes a bite out of your board and realizes that it’s foam and not food, it will likely swim away and not bother you.

How to Prevent Shark Attacks While in the Ocean

The best way to prevent a shark attack while you’re out on the ocean is by knowing the area, and staying out of the water when sharks are present.

Many beaches will have shark alerts or warnings when there’s heavy shark activity. During these times, you should not go out into the water because you may encounter one. Even if the shark is not aggressive, a simple shark sighting could lead to a closer encounter than you might have intended.

Stay Away From Steep Drop-Offs and Sandbars

Different species of sharks like to occupy different parts of the water. For example, you’ll typically see nurse sharks around shallow waters and coral reefs. Once you enter deeper parts of the water that’s where you’ll come across your great whites and other larger shark species. As a general rule, stay away from steep drop-offs.

Touching a shark is hands-down the best way to provoke a shark. And when you provoke a shark, expect to be attacked. If a shark gets near your paddle board, never reach out to touch it. Likewise, never paddle after a shark if you see one in your area.

Reflective objects such as reflective strips on your bathing suit or board can attract a shark’s attention. This is because sharks are naturally curious creatures and will come to investigate if they see something that piques their interest.

Make it a point to avoid reflective materials, and avoid wearing jewelry while you’re out on the water as well. Dangling jewelry like anklets and bracelets act as a sort of bait that beckons sharks closer. If your life vest has a reflective strip on it, never allow it to dangle in the water on the back of your board.

These bright colors stand out in the water and can make you a target for sharks to come closer. Plus, other fish like barracuda are attracted by shiny, bright objects and are known for getting close to humans in order to investigate.

Don’t Paddle At Times When Sharks Are Active

We tend to forget that when we are in the water, we’re in a shark’s territory, not the other way around. It is important to avoid going into the water when sharks are the most active.

Numerous studies show that sharks are most active during dawn and dusk. This is when they are hunting for food. Play it safe and stay out of the water during these times.

Paddle With a Partner

No matter your experience level, it’s always best to go out paddling with a partner. In the event something does happen, you have someone nearby who will help you if anything goes wrong.

There’s also power in numbers when you paddle with a partner. While it’s not foolproof, sharks may be more wary of larger groups of paddlers, and less likely to investigate.

Don’t Stick Around When Sharks Come Near

If a shark does come near you, it’s time to head back to shore. Regardless of if the shark is just passing by or is there to hang out, you don’t want to stick around and see what they will do. It’s instances like this where an ounce of prevention can be worth a pound of cure.

In the Grand Scheme of Things, Any Shark Attack Is Unlikely

As with anything in life, you can increase your safety by knowing more about the situation at hand. When it comes to shark attacks, if you know what to do when you see a shark, you’re going to have a much better chance of avoiding a negative shark encounter.

However, in the grand scheme of things, sharks attacking paddlers is actually a rare occurrence. If you follow the advice here and use common sense, chances are you will be fine.

I hope this guide has helped you understand a bit more about why sharks attack paddle boarders and what you can do to mitigate the risks.